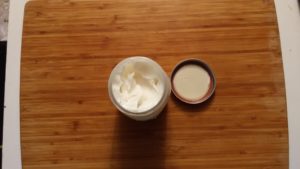 I decided to finally render that lard that I had sitting in my freezer for over a year!

Yeah, I’d say it was about time. You know, I think I was actually kind of scared to do it. Cutting up raw meat (uh, fat) is not my most favorite task. My hands get sore, I have to worry about germs and kids not touching things, and then there’s the risk of getting cut when dealing with slippery meat. Wow, I sound like a wimp! LOL

But seriously, I’m not that big of a wimp. I just tend to get lazy – which is not a good trait of a homesteader, so I should probably work on that.

Well today, I decided to push laziness aside, pull on my homesteading britches, and got to work! I pulled the fat out to thaw over the weekend and got it cut up during lunch time! 7 lbs of fat took me 30 minutes to cut up – Bleh! But it’s done – Woo-hoo!

I know there is a ton of info out there on the web, but I got the “how to” from The Nourished Kitchen which I borrowed from the library. Psst… the library has a wealth of information! If you haven’t tried already, just go to your library’s website and search for the books you’re looking for. Chances are, even if your specific branch doesn’t have your book available, one of the branches within your system will! Just order the book and your library will call when it’s in.

Here’s how it all came together:

Meet the Pork Fat – This is the raw material I had to work with in order to make the lard: 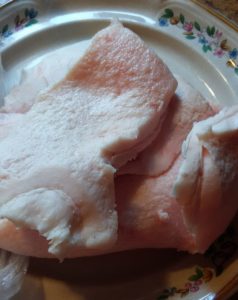 Like I mentioned above, I then had to cut it up in little pieces before rendering on the stove. All I had to do was put 1-2 cups of water in the bottom of a large stock pot along with the fat and simmer it for 3 hours. 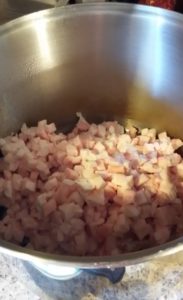 I think the draining of the lard could have gone a little bit better. I experienced more waste than I would have liked.

I started by scooping the chunks of leftover fat from the rendered lard, and then ended up putting the rest through a flour sack towel in a colander. The “recipe” said to use a fine mesh sieve which I didn’t have. 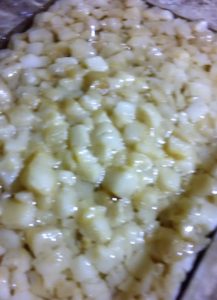 But this is what dripped down into the bowl below the colander! 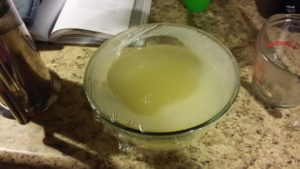 Life got crazy with dinner and getting the kids to bed. It wasn’t until later in the evening that I was able to somewhat finish. So I just covered the bowl with plastic wrap and put it in the refrigerator.

All that was left to do was scoop it into an actual jar! Technically I should have just been able to pour it in while it was hot, but I was still noticing some sediment in the bottom of the bowl. After it had been in the fridge all night, I was able to clearly see that there was a gelatinous layer below the lard. Glad I didn’t pour it all in!

I hope you enjoyed today’s post! Now it’s your turn to go make some lard – it really isn’t that hard.

Working on incorporating some YouTube videos!
Can you give me some love?