If you saw my facebook post the other day, you’ve probably been wondering what we’ve started planting!

We’ve been having some random days of really nice, warm weather here in Ohio lately, and it makes me want to go outside, smell the fresh air, and dig in the dirt. 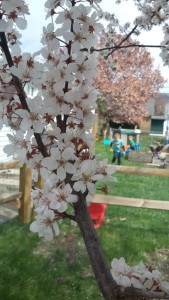 So what do I do? I let the kids play outside while I breathe in the fresh, warm air, and go dig in the dirt! 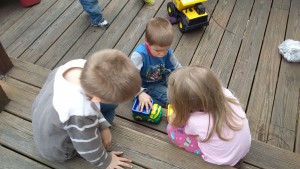 I am so excited to announce that I’ve finally planted Blackberry bushes! It’s something I’ve wanted to do for a little while now, and it’s so nice to have it done! We had a fence put in last year, and that provided me with a great place to put my bushes.

When we went to Lowes to pick up the Blackberry plants, I may have gone a little crazy and picked up a few more things that weren’t quite on my list. Things like potatoes, and onions (well, those were on my list), and horseradish, kale, and wildflower seeds! They had garlic there as well, which I was so tempted to get, but I think I’ll wait for the fall. 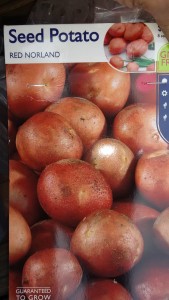 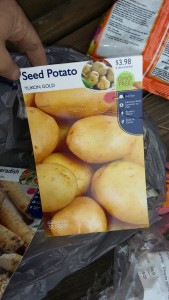 I wasn’t planning on planting potatoes at all, because I didn’t really know where I was going to plant them. Then I had this great idea to plant them in a deep planter we have on the back porch. I guess we’ll see how they do… 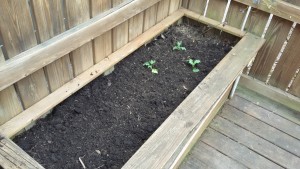 I planted the kale with them – No, I have no idea if they are companion plants or if they’ll just kill each other. We also have a couple of wild raspberries growing out of that bed as well….

Then I planted some onions in the planter beside that one, as well as the little bed we planted our carrots in last year. I’ll have to figure out if we’ll do carrots again this year. The kids really enjoyed the carrots, but so did the ants… Anyone know of some good tricks to get rid of ants??? 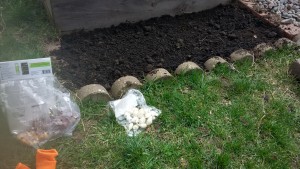 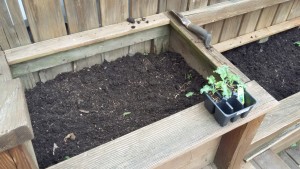 Another thing I’m really excited about is our front garden bed. With all of the little kids, I never felt safe enough to weed it consistently since it’s right by the road. Because of that, it got a little knarly looking, with weeks sprouting every which way and the rock mulch failing after three years of abuse. 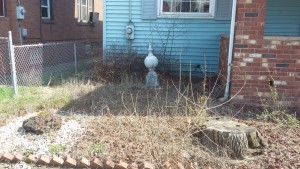 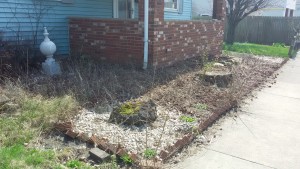 Anyway… I’m slowing getting rid of all that rock mulch. In this little section I planted some wildflower seeds, so hopefully they’ll come up nicely! 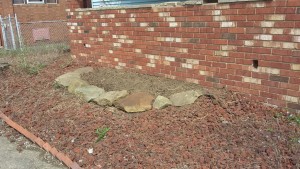 We also just ordered a self-pollinating cherry and self-pollinating peach to place in this front bed roughly diagonally from the corners of the porch! They should be arriving in a couple of days, so I can’t wait to get them in! We’ll probably end up putting in some grass seed in the fall and then again in the spring in place of all the rock mulch (yuck).

Have I mentioned how much I hate that stuff???

Other than that I’ve just been slowly getting some of the outside spruced up…. just don’t look inside our house. LOL!

I weeded the corner garden bed, pruned the rose bush, and am attempting to train it to the fence. The kids and I also cleaned up the back porch, because it was looking pretty trashy. 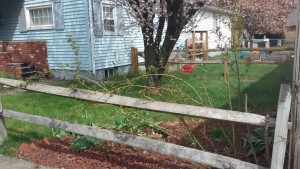 I think that’s about it for now. I do have some more things that I plan to do, but I’ll save that for another post.

What have you been planting lately?